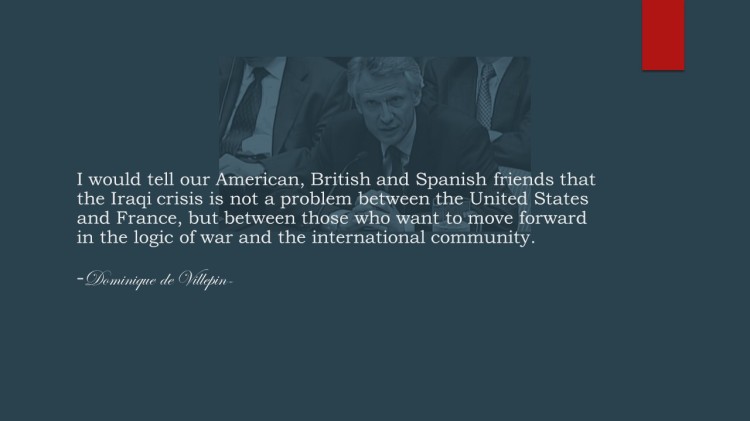 From accross the pond its a remarkable spectable how American public opinion has turned into real Franco phobia over the last two years; many in the US have felt the need to distance themselves from France in extremis.

There are some in the US government who are short on brains and large on rhetoric towards France, without taking into account the historic and bilateral economic realities.

Some members in the US Congress consider the French position with regards to the war against Iraq, the position of the international cummunity  which was brilliantly expressed at the UN by Dominique the Villepin as betrayal. Loud voices have been heard demnding France is punished. Like small children in kindergarden ridiculous gestures are made, like changing “French fries” to “freedom fries”.

Some have flung the image of Normandy’s American cemetery at France face, showing their deplorable character. This are the same disturbing voices which are also reminding France of the large debt towards the US.

There is no doubt that the French have a debt towards the US, so does the rest of Europe. Without the landing of American troops in Normandy, the French “liberation” would have not been possible. Anyone visiting Omaha Beach and the American cemetery nearby knows that, Yes, there is a debt.

But it does not ensue that we ought to blindly and forever applaud whatever the U.S. Government decides. Gratitude is no synonym for automatic conformity or subservience. To disagree on an issue, however important, is neither betrayal, nor to act ungratefully.

To which we can add that, revisit your history since without the political, diplomatic, financial, and military assistance of the French during the War of Independence, the United States might still be a British possession or protectorate. It should in particular, be remembered that at the final and decisive battle of Yorktown, Virginia, there were more French than American troops.

In the allied forces besieging the British Army and General Cornwallis, there were indeed 10,000 American soldiers, 9,000 French infantrymen, plus several thousand French soldiers and sailors aboard the French fleet blocking the Chesapeake Bay in order to prevent the British naval forces from approaching the scene of the battle.

There is no justification in resorting to the issue of gratitude in demanding slavish support as a one-day argument especial since the economic realities are lost to many in the world’s largest debtor nation.

France is one of the most important markets in the world for US companies, as well as being the 8th largest export market for US goods.

So it might be useful for all those loud voices in Washington and elsewhere to stake a step back, consider the mutual historic and economic ties that bind the US and France together.